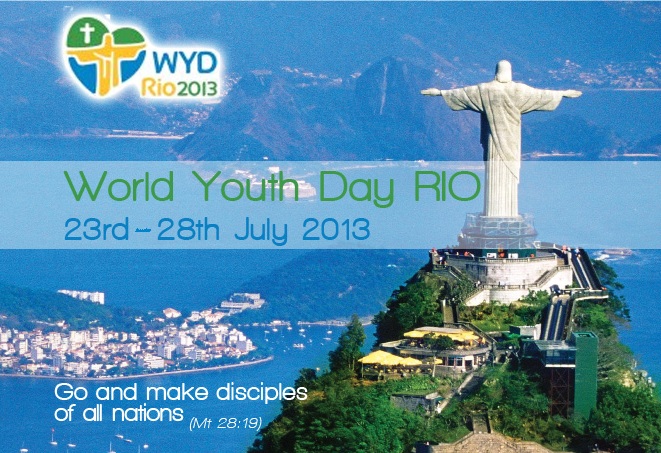 How will pilgrims arrive?

The welcoming of pilgrims to Rio will be done through volunteer positions that will be located at the main entry points into the city – airports, roads and in parking lots.

Here on this page you will find information about your arrival in Rio:

Pilgrims will be in charge of their own transportation from the airport / bus / car park to the place of lodging.

For those who will arrive by car:

For entry and exit of foreigners in Brazil by land, it is required to complete a form from the Federal Police. Overseas pilgrims can print and complete their form on their own, even before starting the journey, avoiding having to worry about such a procedure during the journey. The delivery of the card input and output printed after your typing facilitates their reading during surveillance, speeding up the processing time.

There are no restrictions or special guidance for Brazilian pilgrims. We ask only that follow the local traffic laws and be educated!

For arrivals by plane:

– International Airport of Rio de Janeiro / Galeão – Antonio Carlos Jobim: Located only 20 miles from Downtown Rio de Janeiro is served by several freeways, such as the Red Line, Yellow Line and Avenida Brazil, which facilitates the offsets for the various points of the city, both in the south as in the north and west. The urban transport system offers special lines of taxis and buses, linking Galeão to various destinations, including other city airport.

– Santos Dumont Airport: The airport is medium sized and operates flights airlift flights originating from within the state of Rio de Janeiro and regional flights linking major cities in the country. Meets virtually shipments small distance, but also performs as a few international flights to Asuncion, for example. The location in the center of Rio de Janeiro, allows to reach quickly to the main hotels and tourist attractions. There are in proximity taxi companies and several bus lines that follow for various parts of the city.

For arrivals on the road:

The Rodoviária Novo Rio (Bus Terminal Rio de Janeiro) is strategically located close to the center and to the main roads in and out of Rio de Janeiro (Rio-Niterói, Brazil Avenue and Red Line). The road facilitates the mobility of the population at different points in the city. In the terminal operate 42 bus companies, with 51 box office ticket sales, 219 lines – 48 intercity lines; 165 interstate and international lines 6 – to Asuncion (Paraguay), Buenos Aires (Argentina), Santiago (Chile) and Puerto and Suarez (Bolivia). Receives per month, one million and 100 thousand passengers.

A valuable tip is to be careful when taking a taxi on the spot, because some are not legalized. By calling one, make sure it has a license from City Hall, always visible in the front windshield of the vehicle.

For those coming by chartered bus:

Pilgrims arriving by charter bus must have their vehicles identified in one of 11 points on Accreditation (pockets) located on the highways leading to the city of Rio de Janeiro.

Check out how to find these points if you come from the following access to the metropolitan area of ​​Rio de Janeiro. All work on 21 to 28 July and 24 hours a day.

1) BR 101 Sul – Rio-Santos highway: with only one stop, in the BPVe Tour in Brazil Av, Santa Cruz, since the entrance of town.

3) North BR116 – Santos Dumont highway: there will be a point at Stop Grill Km 0 at Clover Jamapará, on the border between the states of Rio de Janeiro and Minas Gerais.

5) BR 101 North – Rio-Niterói Bridge: are two other points along the way – Oasis Grill at Station 201 Km in Casimiro de Abreu and Pools IGUI Km 294 in Itaboraí;

No buses enter the city without having been duly adesivado. Therefore it is mandatory to pass in one of the 11 pockets for accreditation, required for charter bus.

Another major change is on the landing of the pilgrims, who will no longer be done in parking lots around the city, but directly in the parishes. On June 11, a law was published which regulates the movement of buses, minibuses and vans.

The charter bus will remain parked throughout the event, in areas authorized regular and nearby parishes or return to their place of origin only returning to Rio de Janeiro to embark pilgrims in the same parish. Vehicles charter pilgrims ARE NOT AUTHORIZED TO MOVE THE CITY OR TAKE THEM TO ANY WYD EVENT.

The movement of buses by the municipality will have time restrictions on some days, organized as follows:

– Day 21 (Sunday): at 6am, pockets begin to function. The entry of vehicles in the city’s charter tagged free up at 5am the next morning (Monday).

– 22-24 (Monday-Wednesday): Access will be released into the circulation in the city of 10h to 16h and 21h to 5h, when vehicles may only follow the route to the parish of landing of the Pilgrims.

– 25 and 26 (Thursday and Friday): How is holiday in the city, there will be no restriction on the entry. However, vehicles will not flow in some neighborhoods that are part of the road system Copacabana, because of the activities of the WYD with the Pope. Neighborhoods with restriction are: Botafogo, Cattete, Copacabana, Cosme Velho, Flamengo, Gávea, Glory, Humaita, Ipanema, Botanical Garden, Pond, Orange, Leblon, Leme, Rocinha, São Conrado, Vidigal and Urca. Buses with pilgrims staying in these regions should be driving a car in Saint Kitts. From there, follow the pilgrims to where municipal bus lines.

Warning: the subway will not accept the card transport pilgrim, nor will there be selling tickets in time for these days. The best option is to locomotion by public bus.

– 27th and 28th (Saturday and Sunday): the pockets work until 6am Sunday adesivando buses still arriving for the Journey. The chartered identified arriving between 0h and 12h on the 27th day of the 28 are sent to two parking lots near Guaratiba: in Recreation and Patience. From there, follow the pilgrims walk to the Campus Fidei (walk of about 13km).

– Daily buses (with arrival and departure on the same day): the layout is different and this provided only on days 25 and 26 (Thursday and Friday) for Central Acts with the Pope in Copacabana. They will not flow in the river, making the landing on Fundão Island (City University), where he will expect the return of the pilgrims at the site. There will be an exclusive line of public transportation for these pilgrims, with the rate of R $ 2.75 to the beach. Opening Mass for the 23rd, Tuesday, it is advisable to get to the city by regular bus (with lines to New River Road or other terminal of metro lines in the city).

Chartered vehicles who violate the norms of the period of WYD, circling outside the authorized times and routes or parking in locations not covered, will be fined and the deposits collected from the municipality.

Pilgrims with disabilities have proper identification

To facilitate the access and mobility of pilgrims with disabilities, will coach the organization to make the transfer of these pilgrims between the Main Events. But this option is only available for pilgrims with physical disabilities who have requested special accommodation during the event, identified at registration.

It is important that the pilgrim bring extra money for locomotion within the Rio de Janeiro until the removal of your Pilgrim Kit, which contains your card transport as enrollment package.Will identify itself with stickers vehicles charter routine activity such as regular bus lines, charter continuous (businesses and condominiums, for example), for incoming tourism (transfer airport – hotels, for example) and event (support teams, logistics, etc.).Soon, more information about the local parking / parking of vehicles during the Day.
The transport scheme was developed in a partnership between the National Transportation Agency (ANTT), the Federal Highway Police, the Traffic Engineering Company (CET) of Rio de Janeiro, the city Department of Transportation, the River House and Events Civil Rio de Janeiro and the Local Organizing Committee.

The official currency of Brazil is the Real. We suggest that each pilgrim has approximately R$ 20, so you can get around the city by public transport, until to get to your accommodation and collect your kits.

Attention! Shifting Mission Week will be made on behalf of the participants, depending on point of departure in their country of origin and the point of entry into Brazil.